So you wanna make an indie film? Great! We’re going to help you, or at least send you in the right direction. Our goal with these blogs is to take you through the filmmaking process, step-by-step, and help you to make your movie. 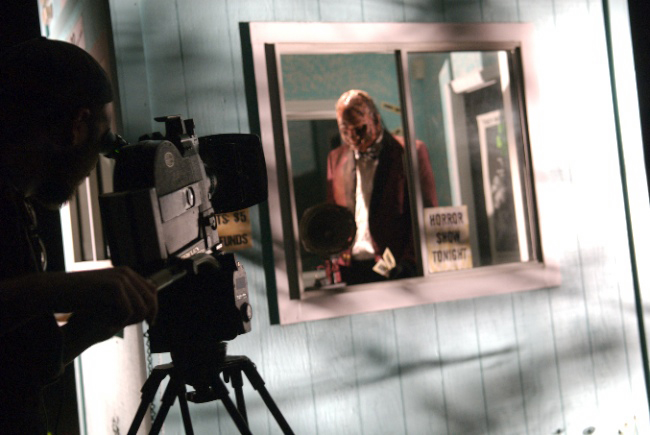 Zombie Frank gets ready for a night of work at the horrorshow.

We have worked on many independent films over the last ten or so years, and we’ve observed that the biggest thing you can do for your independent film is TIME. Yes, a film will cost some amount of money, and it can take a while, sometimes years to finish. But the important thing is that you keep going.

There are a lot of resources out there for aspiring filmmakers – way too many to list in these blogs. If you have a question, ask us! We’ll try to help and point you in the right direction. There are also tons of online forums, books, and videos that can help you too. If you have questions keep digging and asking people. You will find your answers if you look hard enough.

The great thing about film is that it is collaborative, and it allows for a lot of different talents and people to come together and create something bigger than all of them. As an indie filmmaker, you will be wearing lots of hats – it comes with the job, and if you find the right balance it can be very rewarding. Therefore, it is important that you realize what you are good at and what you need help with, and surround yourself with people that compliment your skills. Only with everyone working together can the film be its best.

One very important concept for filmmaking is that you make your film three times: there is the film you write, the film you shoot, and the film you cut. Looking at your film in this way puts you in a good mindset to bring your film to fruition. Let’s look at the different stages:

The film you write:

Script of the film you have written.

When you write a screenplay, the film exists on the page. You are trying to bring characters to life, in a world that will exist in your film. Who are these people (or aliens/monsters/etc)? What are they doing? If you are honest with your characters they will take your story to exciting places. When you are done, the story should progress in a logical way, where the characters act of their own free will.

The film you shoot:

The film you will shoot.

So you have a screenplay, and you’ve been imagining how things will look and sound. During the shoot, many things shift and change – after all, you now have real people in real locations bringing the story to life. This is a good thing if you keep your mindset correct – that is, every time something changes or you need to adjust a shot or scene you keep your final goal in mind. Sure, the specifics of what you are doing may evolve, but the essence of the story remains.

The film you cut:

The film you will cut.

You have all the raw footage, now it is time to put it together. Now the challenge is to respond to your material, and not force it into what you thought you were making. Take a good look at your footage – which things didn’t work how you had planned? What worked better? And what was totally unexpected? Step back and just respond to the footage in front of you and you will make the best film you can.

I am the Projectionist and I run the Drive-In Horrorshow. View all posts by driveinhorrorshow